I read that in order to avoid screen tearing I should enable the option “Force full composition pipeline” on nvidia settings[¹]. However that option doesn’t seem to be available in my system. 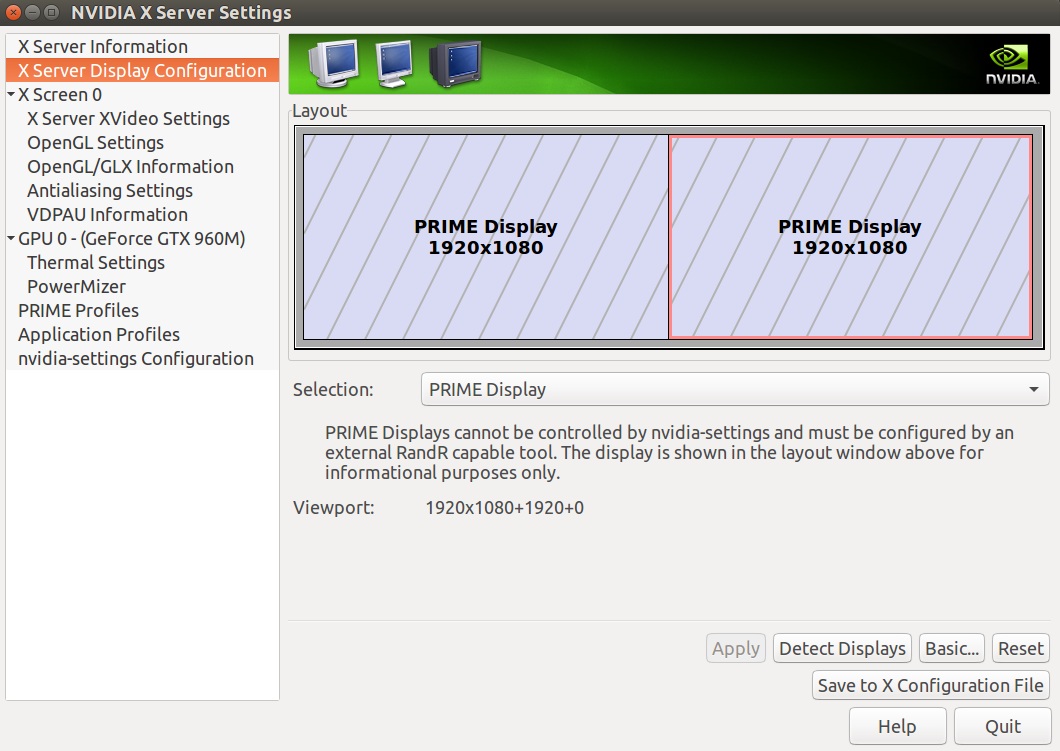 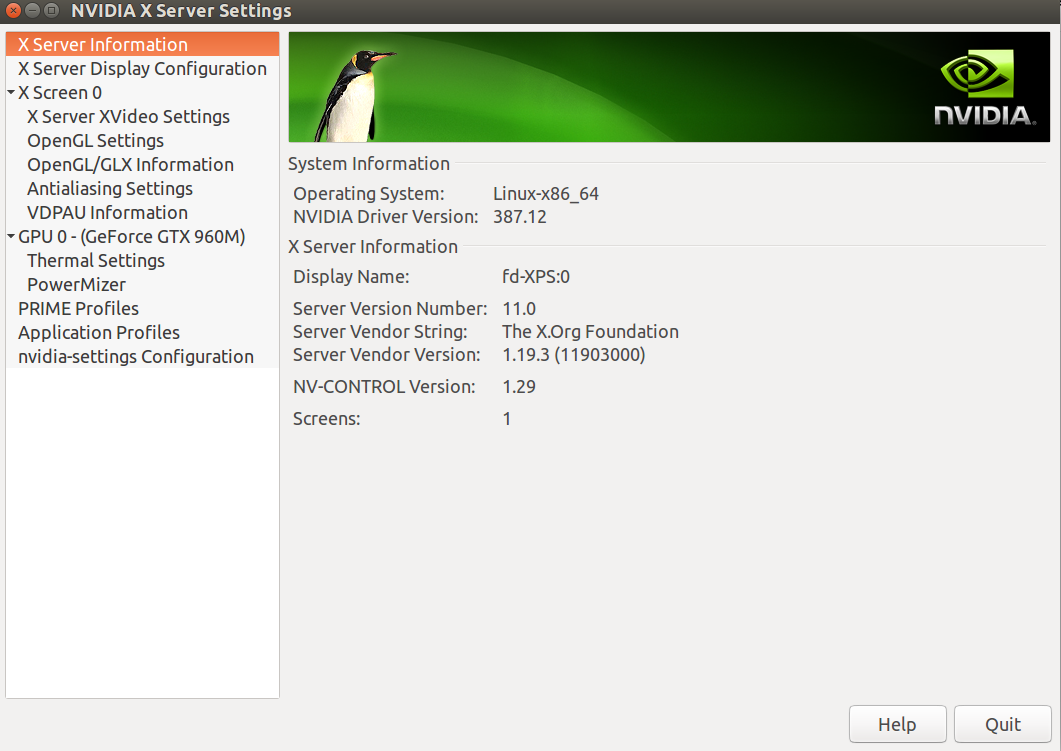 I thought nvidia-settings might have been held back but according to the blog post below, that option should be available in this version:

Am I missing something?

The solutions above do not work with Ubuntu 20.04 but the problem seems to persist. But the working solution is quite simple:

As it says, modeset=0 has to be changed to modeset=1.

I wonder why this is not enabled from the beginning.

In the latest (as of writing this) Nvidia Binary Drivers 430.26 there is such option (of course I am assuming here that the driver is properly installed and works) : 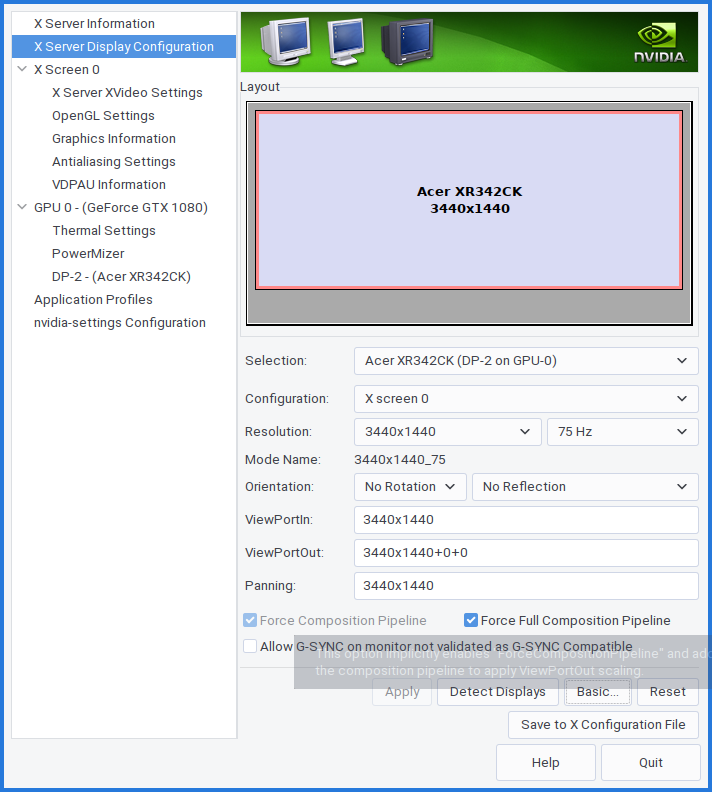 But if it does not show up for You for some reason there is another way to enable it via xorg.conf file.

Here is how it looks like in my system:

Edit /etc/X11/xorg.conf file and the following code to the Screen section (note that there will be more options in Yours) :

Save and then reboot system.

Another possible way is to use nvidia-settings :

Answered by Michal Przybylowicz on November 14, 2021

No you just need to Save X Configuration to somewhere...then only the composition setting will be continued for next reboot...So click "Save To X Configuration File" successfully...thats it.

As an Ubuntu user I've come across this horrible tearing issue and also the installer-freeze issue, both of them related to using an NVIDIA gpu based hardware. I'd like to resolve both problems in this single answer, so here it goes:

The system I'm working with is an Ubuntu 18.04 LTS amd64 running on a Core i7 with a built-in HD Graphics gpu and an NVIDIA GEFORCE GTX 960M gpu.

1st, Ubuntu installer freezes at startup: this is caused by the presence of the NVIDIA chip, so, in order to correct it, boot the installer and press E when the GRUB shows up. Go to the end of the LINUX line and add nouveau.modeset=0. Then continue the booting process by pressing F10. Install the system normally and, when finished, remove the installer media from the computer, reboot the system and log into your account.

2nd, the horrible display tearing problem or the unsynchronized PRIME display: this is caused by an improper configuration of the PRIME display (the system needs to properly offload the graphics in a multiple gpu system configuration), so, firstly, install the proper GPU drivers in the system. In my case, the 390 version driver corresponds to the GTX 960M gpu, so, for example, it would be needed to perform a sudo apt-get install nvidia-driver-390. If the proper driver version is available, I would prefer doing it from the main repositories rather than from a PPA.

After the driver libraries have been installed, go to a terminal and open gedit as a super user with sudo gedit. Then, open the system file /etc/default/grub, locate the line that shows the nouveau.modeset=0 code we set earlier and delete it entirely. Replace that line with GRUB_CMDLINE_LINUX_DEFAULT="quiet splash nvidia-drm.modeset=1" and save. Close gedit and, in the terminal, perform a GRUB update, by doing a sudo update-grub.

After this has been done, close everything and reboot the system. Everything should be working fine now!

I feel your pain. I always have problems trying to figure out how to get rid of tearing on my laptops that have both an Nvidia dGPU (Dedicated GPU) and the iGPU (Integrated GPU).

I'm going to take a stab in the dark and guess that you're system is a PRIME system, in which case the composition pipeline options will not be available (even adding them manually to your xorg.conf file won't work - it'll probably just make your screen go dark).

I think what you're looking for (again, just guessing) is PRIME Synchronization - this is Nvidia's new way of syncing screens.

The important line is the last line. If, for some reason, your PRIME sync still isn't enabled (i.e. set to "1"), then try editing the last line of your /etc/modprobe.d/nvidia-graphics-drivers.conf - change it to:

(again, obviously changing "387" to the version of your installed Nvidia driver).

after you make any changes to any file in /etc/modprobe.d.

If that still doesn't work (which it should, so long as you're using Nvidia driver 370 or higher), then you can try adding the following to your GRUB_CMDLINE_LINUX_DEFAULT in /etc/default/grub:

I don't know what your GRUB_CMDLINE_LINUX_DEFAULT looks like, but after you add the line above, it could look something like this:

I find it astonishing that Nvidia do not enable PRIME Sync by default on hardware the supports it. The reason given is because it doesn't play nicely with SLI - but how many Linux users actually use SLI? I have yet to see any.

If you have any more questions, ask away, I'll try to answer them.

Answered by Vanessa Deagan on November 14, 2021

How to retrieve Kazam video/screencast that did not save? Location of cached file?

Cant install mysql-server on Ubuntu 20.04.1 due to several errors

Use kubectl to apply myapp.yaml to a worker or write our own charm for the app?

How to remove top panel shadow when maximized window touches it, in Ubuntu 18.04?

How to control fan speed?

Why doesn’t MariaDB or MySQL start?

Alternatives to restart nautilus, besides killall and -q?

Why is my system connected to an Amazon AWS server?

How do I automate network installation of many Ubuntu 18.04 systems with EFI and PXE?