What is alpha in Vapnik's statistical learning theory?

I’m currently studying Vapnik’s theory of statistical learning. I rely on Vapnik (1995) and some secondary literature that is more accessible to me. Vapnik defines a learning machine as ‘an object’ capable of implementing a set of functions $f(x, alpha), alpha in Lambda$. This term appears in all following equations, eg the risk functional $R(alpha)$ is written as a function of $alpha$.

I’m having trouble understanding what is $alpha$ in practice and how does it relate to the VC dimension $h$. Suppose for example that I fit a simple regression tree on my data. What are the ‘learning machine’ and $f(x, alpha)$ in this context? Can I interpret $alpha$ as the paramaters (eg split variables, cutpoints etc.) and hyperparameters of my decision tree?

$alpha$ is the parameter or vector of parameters, including all so-called "hyperparameters," of a set of functions $V$, and has nothing to do with the VC dimension.

Long Answer: What is $alpha$?

Statistical learning is the process of choosing an appropriate function (called a model) from a given class of possible functions. Given a set of functions $V$ (the class of possible models under consideration), it is often convenient to work with a parametrization of $V$ instead. This means choosing a parameter set $Lambda$ and a function $g$ called a parametrization where $g : Lambda to V$ is a surjective function, meaning that every function $f in V$ has at least one parameter $alpha in Lambda$ that maps to it. We call the elements $alpha$ of the parameter space $Lambda$ parameters, which can be numbers, vectors, or really any object at all. You can think of each $alpha$ as being a representative for one of the functions $f in V$. With a parametrization, we can write the set $V$ as $V = { f(x, alpha) }_{alpha in Lambda}$ (but this is bad notation, see footnote*).

Technically, it's not necessary to parametrize $V$, just convenient. We could use the set $V$ directly for statistical learning. For example, I could take

and we could define the risk functional $R : V to mathbb{R}$ in the standard way as the expected loss

To make this easier to work with, Vapnik instead considers parametrizing the set $V$ with a parameter set $Lambda$ and a parametrization $g : Lambda to V$. With this, you can write every function $f in V$ as $f = g(alpha)$ for some parameter $alpha in Lambda$. This means that we can reinterpret the risk minimization problem as

$alpha$ in Practice: A Simple Example

To use your example, let's start with a very simple regression tree to model some data with one real-valued feature $x in mathbb{R}$ and a real-valued target $y in mathbb{R}$. Let's also assume for simplicity that we're only considering left-continuous decision trees with a depth of 1. This defines our function class $V$ implicitly as

which is not a very mathematically convenient formulation. It would be much easier to work with this if we notice that the depth $d$ being exactly 1 means that there is one split point, which means that we can parametrize $V$ using the parametrization $g : mathbb{R}^3 to V$ defined by

Now, let's say we want to use a more complicated model. Let's use a regression tree to model data with two real-valued features $(x_1, x_2) in mathbb{R}^2$ and a real-valued target $y in mathbb{R}$, and with decision trees with a maximum depth of 2. Parametrizing $V$ this time is much more complicated, because regression trees depend on the shape of the tree, which variable is being split at each node, and the actual value of the split point. Every full binary tree of depth $d le 2$ is one of five possible shapes, shown below:

In addition, for each leaf on the tree, we have to specify a real number parameter, and for each branch vertex we have to specify which of the two features we're splitting on and what the value of the split point is. One way you could construct the parametrization would be to use a discrete variable to parametrize the possible tree shapes, another discrete variable for each node to parametrize whether $x_1$ or $x_2$ is being split, and then real-valued parameters for the actual values of the function on each piece of the domain. Once again, there are many ways of parametrizing this set, but here is one: Let $$ Lambda = { 1, 2, 3, 4, 5 } times { 1, 2 }^3 times mathbb{R}^7 $$ For a parameter $alpha in Lambda$, e.g. $alpha = (4, (2, 1, 1), (0.18, 0.3, -0.5, 10000, 538, 10, pi))$, the first coordinate determines the shape of the tree, as listed in order above; the second coordinate has three coordinates that determine which of the two features is split on at each branch node (note that the middle one is "unused" for shape 4, which is not an issue because parametrizations don't have to be injective functions); the third coordinate has seven coordinates, each of which is a real value corresponding to a node in the graph that

I've shown the graph corresponding to this parameter below: 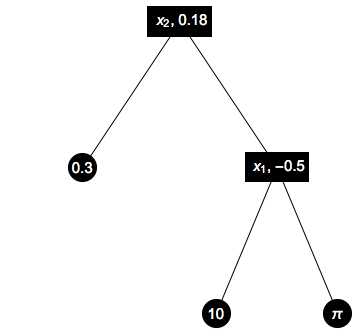 The learning machine can also be much more complicated. For instance, it also includes any regularization being used. Limiting the set $V$ is one type of regularization used to avoid over-fitting, but of course there are other types as well.

Answered by Eric Perkerson on November 21, 2021

What statistical analysis to used for kinetic data with multiple groups?

In R, why do the p-values from anova() change when you add more predictors?

Classification model not working for a large dataset

Sigma algebra generated by random variable on a set with generators

What is the seasonal trend lowess model in time series?

Non seasonal and seasonal parameters of this time-series