Will this separate pipe for dishwasher cause sewer gases to enter into cabinet and dishwasher to get wet dog smell? The separate dishwasher pipe design – at top of pipe is a 2” Wye fitting – one side is open and other side dishwasher drain hose goes into it, the wye is connected to a straight pipe, then a p-trap (glued on), then a pipe connecting into drain / waste line (same drain line the sink connects to above it). The corrugated dishwasher hose goes diagonal to straight pipe and is zip tied (little bit of flat) and then up to wye opening (not a smooth high loop).

If so, how do I correct problem? can I cut off Wye and cap pipe, connect dishwasher to Insinkator with high loop inside cabinet – note sink and insinkator have Oatey aav (dfu 20) for vent? Have a similar setup with a basement bar sink but no garbage disposal. Been trying to determine where sewer gas (methane) is coming from. Put clear p traps on today to see if aav (put new one a few days ago) are working or high winds drawing down p traps. Have water softener, well water has been tested, septic tank cleaned last year, raised roof stacks foot and put candy cane with 3/8” drilled hole caps, ran garden hose down every roof stack, recaulked all toilets. Plumber that designed n installed long gone and was approved by county so please no comments just solutions. 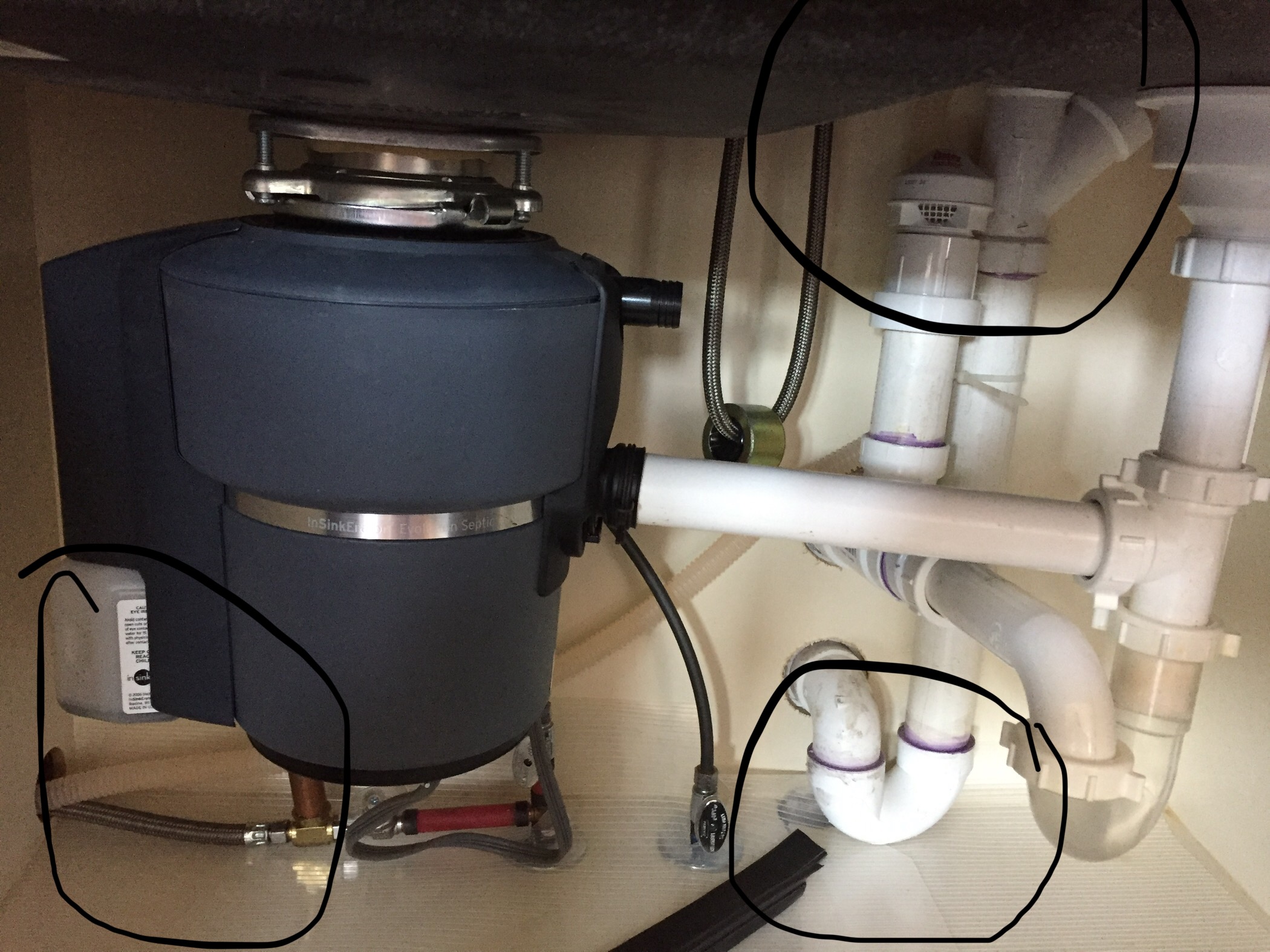 Odd set up. Normally the Dishwasher should attatch to the inlet spigot on the garbage disposal. (you likely have to tap out the round disk first to open the pathway) Ive never seen anything like the circled extra drain path. I cant tell what its attached to, but if the DW hose is just stuck into the top, that dosnt seem well designed. Im also curious what it does on the other side of the wall: are the two drains properly Wye'd or is there just a tee connecting them? 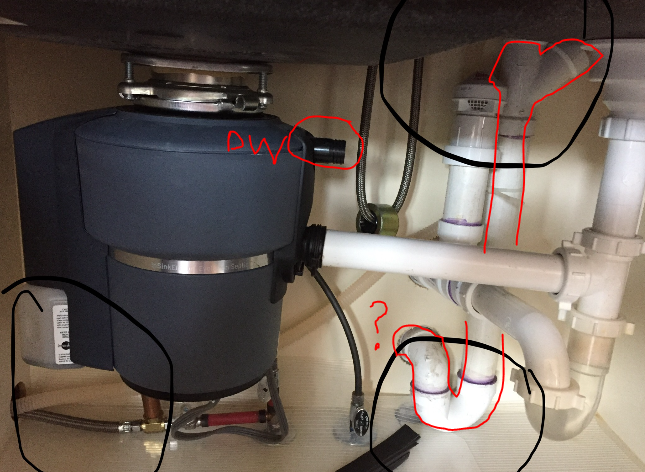 The whole thing is about the most contrived way of setting it up. There needs to be one wall entrance, not two (why, whyyyyy I ask) and the pipe in the wall needs a proper vent connection to the vent stack. If this is an island, then I'd really advise getting something esthetically pleasing going up into the ceiling, carrying within the vent pipe, and connecting to normal vent stack. The AAVs are crap. I've not seen one yet that wouldn't eventually fail, and they fail slowly so that you get bad smells in little increments and get used to them, and then guests come over and you wonder why they won't come over again :/

As for the islands: that's what happens when a designer doesn't ask an engineer first. Some "genius" somewhere did this first, without understanding anything about plubming. Then other "genius" designers, equally clueless, like monkeys flinging poo at each other because why not (everyone does it, lol), have copied this "idea". Eventually, as these absurdities began failing post-hoc inspections (usually on house sales), rich people misled by the "genius" designers began pushing back on the local authorities, who in turn began pushing back on the code development community. The code people were basically presented with those as a fait accompli and told "deal with it". They understood the interpersonal dynamics of this developing fiasco well enough to toss the ball back to the lower court - suggesting that localities have the power to allow whatever the heck they want in their jurisdiction. Since this was effectively a political issue to the localities and their officials, the localities treated this as a "nod" from the code development ivory tower and began allowing those, whereas in reality most engineers who keep the codes going would have nothing to do with AAVs in islands.

From my engineering vantage point, AAVs should have never been allowed on kitchen islands. You want an island, you get a vent pipe going up from it and tied into the vent stack. It can be a clear pipe for all I care, to be less offensive, but you do need it and there's no skipping that one.

There's nothing "prettier" than a beautiful "designer" kitchen with an island, looking like a magazine picture, but smelling like a dog's rear end. That's why smellorama didn't pan out, and why magazine pictures are still just pictures, no smell. Because these things are, frankly said, like supermodels with diarrhea. Gut-wrenchingly sad.

The smell is almost certainly from your AAV. While they are not to dispose of gases from the pipes, they always do. Having an AAV makes really no sense because you are going into a wall.

It doubly makes no sense because there seems to be another drain without one - unless I am not seeing it in the picture.

The only "fix" is to have this drain attached to a proper vent which is probably in the wall behind it. There is no other "fix" unless you just upgrade the AAV and hope it does a better job of not letting smells out.

As far as dishwasher - it should be going into garbage disposal. I don't think that is the smell issue but might as well get it right.

Purpose of a P-trap is to prevent the smell from the drain/waste line from entering the house. What I see in your sink setup is a vent pipe that is venting the gas into the cabinet, effectively bypassing the P-trap under the sink.

If possible, remove the vent cap and replace with a end cap, do not glue, just a tight fit, and see if the smell goes away. I have never seen a vent pipe from the waste side of the drain vent into the interior of a house. That just seem like a strange location for a vent pipe. 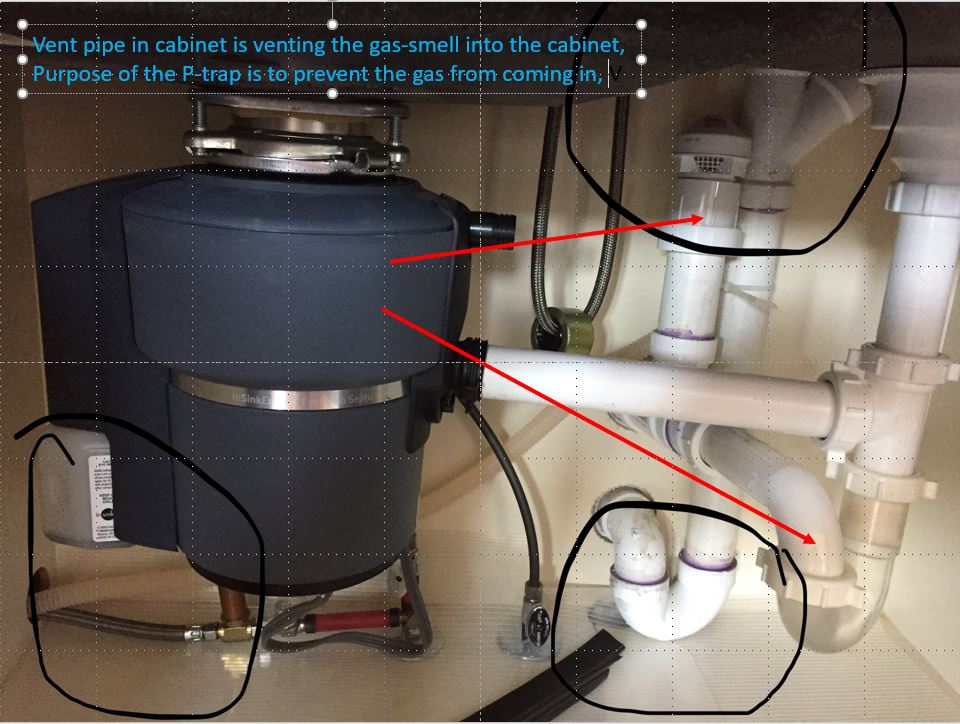 If the smell goes away, you can seal the end cap on to that pipe. Maybe someone can come up with a reason why the drain/waste line is venting into the cabinet at that specific location.

Why would capping one sprinkler zone cause my toilets to whistle?

Is it worth replacing this flex pipe with hardpipe

Is there a tool I can use to cut out the templates for door hardware?

2 switch to one – Similar but not the same

Regulations for buried cable in the UK

How do I prevent an interior door from latching?

Does build up in lead pipes make them less dangerous?

I have a light switch that crosses multiple breakers

How to finish edge of tiled shower with metal outside drywall?

Does anyone have any idea what this is?

How to open this drainage cap?

Is this notch in a stud acceptable?